Staniel Cay is an island located in The Exuma Cays, a district of The Bahamas.

Staniel Cay is located roughly 120 km (75 mi) south of Nassau and 400 km (250 mi) southeast of Florida. The island has a population of less than 118 full-time residents[1] and has an area of less than 5 km2 (2 sq mi). Staniel Cay is inhabited by a small Bahamian village which lies on the western shore. The village is composed of residential housing, a church, a post office, a library, three small retail stores and marine supply shops.[2] Staniel Cay is protected by the Bahamas National Trust, the organization in charge of the conservation and preservation of places of historic interest and natural beauty in The Bahamas.[3]

Staniel Cay was established in 1783 when the American loyalist settled the entire archipelago of Exuma.[4] The island gained its popularity with the establishment of The Staniel Cay Yacht Club in 1956, founded by Bob Chamberlain and Joe Hocher.[5] A variety of businesses operate on Staniel Cay to provide accommodation and organise activities. In 1965, Thunderball Grotto, a limestone cave situated on the western coast of Staniel cay, was the setting of the James bond film Thunderball. It was from this film the name Thunderball was given to the grotto.[6] The island was also used as a filming location for a scene in the (1983) Bond film Never Say Never Again.[7] Staniel Cay has a small airport called Staniel Cay Airport,[8] which makes the island reachable both by sea and air. The airport closed for seven months in 2015 for runway repairs and reopened to air traffic on 18 November 2015.[9]

The official language of Staniel Cay is English, but dialects exist among the different islands and Cays. A blend of African, English, and island dialects makes up the Bahamian English language. The idiom on the island was influenced by the African slaves and other settlers.[10]

Located near the center of Exuma Cays. The island, located between Big Major Cay and Bitter Guana Cay, is one of the larger islands within the Exuma Cays.[11] The island is composed of beaches, salt water, and a variety of vegetation. An abundance of coral reef can be found along the shores of Staniel Cay. It is accessible through scheduled flights, charter airplanes, and private planes, using its 3000-foot airstrip. It is also possible to reach the island by boat providing anchorages for yachts.[12] 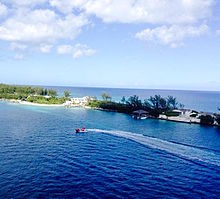 View of the Island in the Exuma Archipelago

Vegetation includes palm trees, bougainvilleas, hibiscus and seagrape.[13]A diverse range of red, black and white mangrove can also be found on the island. Flora includes sugar cane and tamarind, which are typically served as local dishes.[14] Fauna includes the typical Bahamian Pig and Anolis lizards.[15] In 1977, small groups of brown anole were released in Staniel Cay,[16] small brown and yellow lizards with black markings on their backs. These small reptiles are 17–20 cm long and usually live in forests. The reptiles feed on the insects around the island. The waters are populated with fish and vegetation of varying sizes including larger fish such as: sharks, groupers, barracuda, angelfish, and butterfly fish, miniature crabs, and daredevil shrimp.

Back to Top
Call Now
Location